Remember how I said yesterday that this story was fairly light on the blood-and-guts gore and I would have no issue with my teenage girls reading this?

Yeah. Never mind about that. Apparently all the blood-and-guts gore is in the second half of the book. It suits the story, and is a necessary part of setting the scene as this story comes to its conclusion. There is no need to be concerned about reading violence and brutality that is added just to add it; it is a part of the story and its conclusion and is just as necessary to the flow and feel of the story as the characters themselves are.

So, I generally try to not give any spoilers about books, and this one is no exception. It ended just as strong as it started, and this is certainly a book that needs to be put towards the top of your Read-by-Halloween list! What I can and will tell you, is that the 5 characters in this story were haunted more by their own demons of their past behavior compared to anything the entities in the house could do to them. Maybe that is the true moral of the story; the things that haunt us on the outside is due to the things we bury on the inside.

Looking for some more quick Halloween reads, I found The Haunting of Reindeer Manor, by Kevin Michael Guest. Reindeer Manor is a real Haunted Attraction in Dallas, Texas.

A professor looking to end his career with the publication of 9 hauntings, Professor Anderson forms a team of 4 others to investigate, not letting them know the history of the house, Reindeer Manor, so he could get their honest feelings, input, opinions. Jessie is a college student who has no Psychology or paranormal experience. Professor Anderson also has his secretary/mistress Mary attend, for no reason other than his own comfort I would imagine. Professor Fletcher is hard up for the money, and the Dean promised him a full time job if he does this favor for him and Professor Anderson. Amy is a medium with very strong powers that seem to be blocked by some entity in the house. These 4 comprise the team along with Professor Anderson, and convince the current owner of Reindeer Manor, who is using it as a Halloween Haunted House attraction, to restore it to its original form so they can examine it for 5 days and nights. For the sum of $100,000.00, the owner knows the dangers, and that he should refuse, but money wins out.

I am halfway through this story, and it is great reading so far. It is full of suspense, frights, and nothing too blood-and-guts gory that I would be concerned about my teenagers reading this and freaking themselves out! I will have this finished by tomorrow, and give my final report. 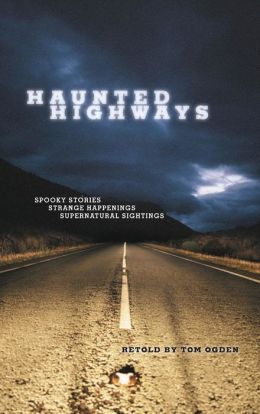 Retold by Tom Ogden, these short stories are based on myths and urban legends. What these have in common is that they all take place on a highway, road, trail, or path of some sort. Due to the fact that there are thousands of such myths and urban legends, Mr. Ogden chose 4 categories to loosely stick to, while still sharing a good representation.

The first category is about vanishing hitchhikers (a story you have heard immediately came to mind, didn’t it?) He included The Phantom Hitchhiker, Resurrection Mary, the Weeping Woman, and The Prophecy.

The second category is titled Street Walkers. No. Not those street walkers. The firsts two stories in this section will take you to Hawaii. Next you will travel to Tokyo and learn about Oiwa’s Ghost. Back in the States, you experience The Funeral Cortege of Baynard Plantation in South Carolina. John Brown’s Body takes you through the Civil War Era, into West Virginia. The Nun’s Walk and The Occurrence at the Creek Road Bridge wraps up the 2nd section of the book.

If you haven’t been completely freaked out yet, you will continue on to the 3rd part of the book, Phantom Travelers. This immediately brings to mind many movies that scared me so much as a child, I will not watch them even now. Included are The Long Ride Home of Peter Rugg (275 years and counting!), The Return of Mad Anthony Wayne, The Man Who Disappeared, The Ghost Train (numerous people claim that while traveling the highways along the same route that President Abraham Lincoln’s funeral train took, they see his train), Telly’s Phantom (yes, Telly Savalas), and The Curse of Little Bastard, in case if you ever wondered what really caused James Dean’s car accident.

Part Four is Lost Souls. A mixed bag of ghosts that include cowboys, Indians, and fair maidens of the Old West. Phantoms on horseback, an Irishman who opted to dance with the devil, and read about strangers stuck on a certain set of railroad tracks being pushed to safety by a busload of children. How better to end the book than with a tale on Route 66, or “The Highway to Hell”, as the author puts it.

These stories are all fairly short, none over a few pages long. Most of these are tame enough, without blood and gore and just scary, in that I will be sharing them with my girls with no worries.