This is the first book in the Ethnic Eats Mystery cozy series. Laurel Inwood, a professional chef, moves from California to Hubbard, Ohio to help manage her Aunt Sophie’s restaurant while she has and recovers from knee surgery. 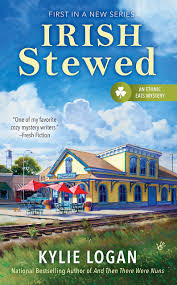 Sophie has lied to Laurel about the type of restaurant she owns, and instead of finding a luxurious restaurant, she finds The Terminal, a run-down restaurant that most would refer to as a “greasy Spoon” restaurant. Not happy with her Aunt’s deceit, Laurel ends up staying to help out.

The dead body of the famous local reporter that is found in the dining room on the night of her arrival may have peaked her interest as well.

Laurel has no idea who to trust, as well as her own list of suspects, including the handsome owner of the Irish gift shop, Declan Fury, and her own Aunt Sophie. Laurel has plenty to keep her busy as she tries to bring the Terminal back to life, and figure out which one of her new acquaintances’ is a murderer.

Initially the patrons are slow to take to the idea of a new menu, but with the help of Declan, soon Laurel has an idea to get the Terminal packed with customers. Featuring ethnic foods for one or two weeks at a time, the customers are loving it, but Laurel now needs to let Sophie in on what she has done.

This is a quick read with lots of action and a great storyline! I am already reading the second book in the series, French Fried.

What are your current cozy mystery favorites?