This was another great installment in Mr. Taylor’s Irish series of books. This one takes place after Fingal’s marriage to Kitty, and there are lots of changes going on in not only Fingal’s life, but everyone around him as well. 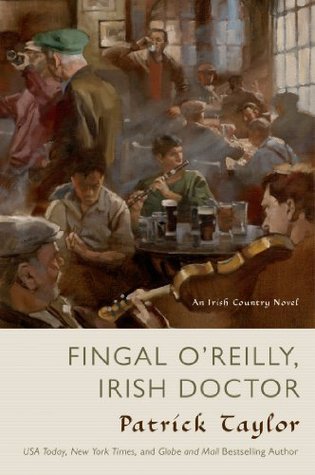 Barry has done specialty but is ready to return to the practice with Fingal. Kinky is getting married herself, and the town is not being very accepting of Jenny, the new “lady” doctor who is helping Fingal while Barry is specializing.

The residents of Ballybucklebo are up to their usual antics and good times, and this story takes you back to another time when things were easier.

This story is set in 1965 Ireland, but also goes back thirty years to when Fingal first met Kitty, and how she got away from him the first time. Every other chapter goes back 30 years, but it is written in a way that makes it a smooth, easy read.

I think this story could easily be read without having read any previous books in this series. I am pretty sure I have not read the very first book in the series yet, but have read about 5 or 6 of the others. But with that being said, you should read them all; they are that good 🙂

If Ireland interests you, especially Ireland in the early 20th century, these stories are full of factual information about the history of Ireland. As Mr. Taylor is a licensed medical doctor, the medical information that is included in the book is also spot on, and gives the back story on how diseases were so very devastating in this time of history, as well as how antibiotics and cures were found and developed.