What are your favorite Halloween / scary books? 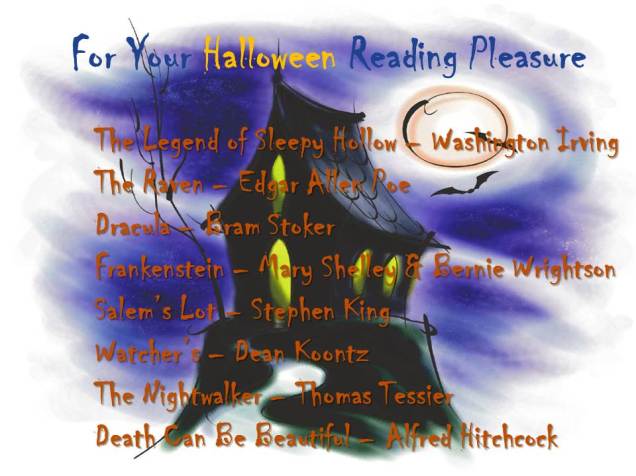 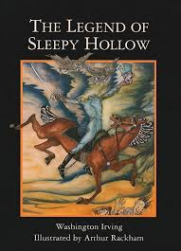 Though stories of spirits and hauntings and visits from ancestors of old are abundant in Sleepy Hollow, tiny neighbor to Tarry Town, nestled quietly in New York, the one most talked about is the Headless Horseman.

Legend claims he was a Hessian trooper, whose head was removed in a battle of the Revolutionary War, and the tale is told that he rides out nightly, in search of his head. Officially, he is known as The Headless Horseman of Sleepy Hollow.

Some blame the influence of the witching air that pervades Sleepy Hollow, some blame the story tellers, and some just blame the Headless Horseman himself.

We then learn about Ichabod Crane, resident of Sleepy Hollow, and teacher to the children of the residents. Described as tall, but lank, with a flat head, large ears, and green eyes that looked like glass, Ichabod does not a pleasant picture paint. The baggy clothes that made his attire only leant to the impression of a wandering scarecrow. Even more bewildering is the idea that Ichabod took up residence with the families of the students he taught, moving along to the next house a week at a time.

It seems that Ichabod’s real troubles started with the meeting of a particular woman; Katrina Van Tassel, the only daughter of a successful Dutch farmer. Ichabod took an instant liking to her when he saw her; and that liking increased exponentially when he saw her father’s farm, a farm that Katrina’s husband was sure to inherit. The only competition he seemed to have for her affections were from Brom Bones.

Brom began to torment Ichabod with practical jokes, unwilling to give himself a bad name by beating the lad up, though he could do it easily enough. Ichabod was good enough to avoid him as well to avoid having this happen.

Having been invited to the Van Tassel’s for the evening, Ichabod was more than willing to let school out early, to the excitement of his pupils. Ichabod goes on horseback to the Van Tassel farm, enjoying the beauty of Autumn in Sleepy Hollow (Autumn is my absolute favorite time of year and I could read these descriptive paragraphs in this story over and over again!)

Something certainly happened between Ichabod and Katrina that night, but what it was for sure, no one seems to know. He left the farm dejected and dismayed, upset over the idea of not taking over such a beautiful estate.

Riding back home, downtrodden and defeated, suddenly all the ghost stories that were told that night that he gave no attention to came crowding into his mind, leaving no room for any other thoughts.

With a mind of its own, as Ichabod became more scared, Gunsmoke, the horse he rode, seemed to be scared himself, and took Ichabod in a direction completely different from what he had intended. In the shadows appeared a form, huge and towering, not moving; just there. The apparition moved into the road, but came no closer. Ichabod moved away, but no matter the speed or direction he took, he was shadowed by this thing. Moving into the moonlight enough, he finally showed himself to be headless.

The last thing we hear of Ichabod is that the Headless Horseman threw his head at him, hitting him in the cranium and knocking him to the ground.

The horse returned home, sans rider. The saddle was found with a shattered pumpkin next to it, but never again was Ichabod Crane seen.

There were tales of course, that Ichabod was still alive, but chose to leave the town, both from embarrassment and disappointment of not winning Katrina’s heart. Brom married her; and always had a hearty laugh when the story of Ichabod was told, making some wonder if he knew more about it than he ever let on. 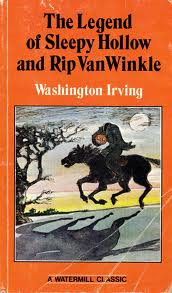 Quote: There is a legend that on the night of his death, Wahington Irving said “Well, I must arrange my pillows for another night. When will this end?”

Some Facts: Died in Tarrytown, NY, which is right next to Sleepy Hollow. As America’s first genuine internationally best-selling author.

Irving and his grave were commemorated by Henry Wadsworth Longfellow in his 1876 poem, “In The Churchyard at Tarrytown”, which concludes with:

Living, to wing with mirth the weary hours, Or with romantic tales the heart to cheer; Dying, to leave a memory like the breath Of summers full of sunshine and of showers,

A grief and gladness in the atmosphere